According to this AsiaOne online article, “Cancer cases have jumped by about 17 per cent since 2010, despite certain cancers being preventable if people choose healthier lifestyles and drop bad habits.”

From an Elements of Numbers (EON) perspective, the periodic vibes present in this year’s 2015 energies are hot and volatile. It’s just like the hurtful burning effects of the FIRE element – sharp when focused (like a laser pointer) and wild when distracted (like a fiery forest fire). In my 1st Jan 2015’s “Numerological Predictive Observations 2015” article, I highlighted ‘cancer tendencies’ as one potential health condition we should be mindful in 2015. I also mentioned increasing skin, digestive, and eye problems that might be manifested strongly this year. It’s not a coincidence I have included in my forecast article. I have applied the EON principles to analyse the underlying influences of the numbers, elements, and potential energies that might surfaced strongly in the year.

Like the Yin-Yang principles, there is both a positive and negative effects of the influencing vibes. It’s just like there is two sides to a coin. While we take precautions on the negative energies, there is always the positive side. In the same graphic image attached to my forecast article, I pointed out “medical breakthrough on health, mental, immune, and cancer”. According to this MailOnline page, “British experts who made the discovery are already talking of a ‘long-term cure’ for many common types of cancer after seeing astonishing results in a laboratory experiment involving human tumours grown in mice.” It’s still a long way before it’s certified for use on humans, but at least it’s a good breakthrough. At least we know the medical scientist are working towards possible cancer cure. Take the case of this ITV NEWS article where “Doctors have hailed a “spectacular” breakthrough in cancer treatment after a pair of drugs were found to shrink tumours in nearly 60% of people.” 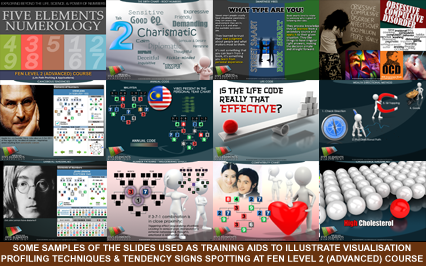 At my recent FEN/NSQ Preview session, one participant gave the birthdate of a female person for the ‘live’ case study analysis. Among other traits mentioned, I also forewarned the person might be in the “high-risk group” of people with cancer tendencies.

By now, we know strong FIRE element is a contributing cause manifesting the cancerous cells. There might be other elements, traits, and characteristics (like emotions and tempers) present in the person’s chart ‘triggering’ the cancerous cells. That is why I’ve included the method to identify the cancerous tendencies (including cholesterols and other health symptoms) in the FEN Level 2 (Advanced) module.

In my “Numerological Predictive Observations 2014” article, I mentioned increasing diabetic tendencies. In the SundayTimes Singapore online article, it was reported “Many diabetics in Singapore at risk of going blind” according to a study made. That’s scary. The negative energies have manifested last year and the ‘symptomatic effect’ might have affected people with poor health care and bad eating habits.

Health is paramount and it’s important you start taking care of your own health, for your sake and that of your loved ones. It’s equally important to take up health and medical insurance to provide financial support when something undesirable happens.

I noticed possible health tendencies present on certain charts with specific numbers, elements, or patterns while researching to strengthen the Elements of Numbers (EON) method. That is also one reason I have also included a basic lesson on identify annual health symptoms in the FEN Level 1 (Basic) course. And since understanding your potential health symptoms in a year is important, I want to help you take health precautions while you’re still healthy. I want you to know the potential damaging effect that might happened to you or your loved ones. Signed up for the FEN Level 1 (Basic) and/or FEN Level 2 (Advanced) course now. I will share the method to identify the diabetic and cancerous tendencies with you in class.

Don’t wait for the doctor to advice you on the need to adjust your eating habits and lifestyle because the MRI report revealed something undesirable. By then, the symptoms have already surfaced and it can lead to expensive medical healthcare and stressful times ahead.

When you know the probable health symptoms early, you can take preventive measures to lessen the negative effects from triggering unhealthy results. Register now and know your potential health symptoms.