I was at a social gathering the other day and met Karen who quickly took the opportunity to ask me about her son’s character after hearing about my passion and research on human behavioural and personality profiling. She found it stressing and tiring to manage her son. She attended a free DISC profiling preview talk organised by a local community club to know more about her son. According to her, the DISC report on her son was “discouraging” and that made her more worried.

There are many behavioural profiling methods like DISC that adopted the multiple-choice-questions (MCQ) format to identify categorised patterns. The DISC profiler would then grouped the answers into specific traits and profiling areas to form a set of final observations. The DISC method is useful and effective when it’s correctly used. When someone answers the DISC questions untruthfully without realising it consciously or subconsciously, there are limits in identifying the hidden inner self traits using the DISC method. It’s not about telling white lies on ourselves or intentional answering the question we thought should be correct. We may put in the answers based on our own perceived interpretations of the questions that may not reflect our true self. External factors like work and emotional social stress may also affect a person’s attitude and thinking. When people answered the questions with distracting minds, these MCQ-based methods may not produce a “truthful” analysis report. They may become disillusion when things don’t work out the way they thought it should be after putting in the relentless hard work to improve on the “negative” areas stated in the report.

Karen’s son, David is 4-years old this year. Karen answered the DISC questions on David based on her observations on him, his actions, behaviours, and reactions. Karen was sadden and worries about her son after receiving the DISC report.

Many other parents who took the DISC questions on their kid’s behalf could get similar “inconclusive” behavioural profiling report. Let me highlight the problem has nothing to do with the DISC method. The lack of understanding on the parents in understanding their kid’s personality and traits contributed to the report findings. Ideally, the DISC profilers should explain the objectives of DISC and highlight the constraints to the eager parents when profiling young kids. Parents should read the report as a general guideline on their children based on their observations. They should not consider the report as definite findings on their child’s personality. They should not “stereotype” their child’s personality unnecessary. At a young age, many kids are hyperactive, curious, rebellious, and naughty. A report is just a guideline based on certain findings, and may not reveal the entire truth on the person. If the report is bad and negative, we cannot assume the kids would one day become bad people when they’re older. Similarly, if the report is positive and encouraging, it doesn’t mean the kid would one day become the person whom the parents want them to be. That’s a naïve thought.

Karen gave me David’s birthdate and I quickly plotted his Birth chart on a piece of paper. She noticed excitedly that I was plotting David’s chart with a series of numbers. I told her I’m using the Elements of Numbers (EON) method to plot the chart as it’s faster and easier to plot and interpret.

When a child is young like David, we can easily focus on the number in location I to identify signs reflecting the kid’s traits, behaviours, and actions. Although the ROOT number is important in identifying a person’s main characters, it’s too early to presume David would develop such traits since he is still young. It’s more practical and effective to pass on the correct habits and mindset to the kids when they’re young as they go through the learning, observation, exploration, and try-out stage. By instilling right values during formative years, we can only hope our child would become a good person. And their ROOT numbers (and other numbers in their Birth charts) may show more positive traits than bad ones.

We need to look at the Birth and Personal Year charts to identify the traits that may suggest why a child behaves in certain ways. Often, you may notice the elements and numbers present in the charts could have varying influences on a child’s behaviours and actions.

“Yes, he’s rebellious and easily distracted,” said Karen, after I told her about his traits. Look at the number 5 in location I. Check out my book “Elements of Numbers: Fast and Easy Character Profiling” on the tendency traits of the number 5. The tendency signs include traits like hyperactive (cannot sit still), rebellious, freedom fighter, stubborn, analytical easily distracted, and constantly exploring. David likes playing “Match Three” puzzle games and Lego sets. As the number 5 has “duality” vibes, it could influence the left and right sides of the brain manifesting the logical reasoning, creativity and intuitive areas of the person.

I’ve mentioned to Karen some other traits that I noticed from David’s Birth and Personal Year charts. I could see her nodding her head each time she could associated the mentioned traits with her son. You can easily check the basic traits out from my book. It’s also a good time to buy my book (if you’ve not already done so) to know more about profiling young kids, and identifying the influencing vibes that may affect their behaviours and actions.

You can use the Elements of Numbers (EON) to profile a young child by focusing on specific areas of the Birth chart. It’s not necessary to follow the complete steps I have included in my book (Page 63) on interpreting a Birth chart from I–X locations.

We have to be rational and practical when profiling a young child. Do not worry the parents unnecessary. You can try to explain the tendency signs to let the parents be aware of the traits and personalities, and how they can work on the negative vibes through suitable workarounds. 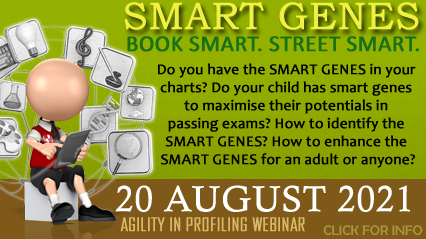